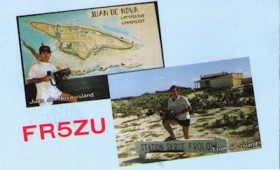 What we can easily say, is that the island of Tromelin does not leave indifferent its visitors. Feelings are very differents from one person to another. Is that due to the insulation on this square kilometer of sand with the ocean all around ? Let’s meet one of those who came on the island to brave the loneliness, the ocean’s spray and the strong winds.

I was happy to have the opportunity to interview Jacques Quillet (FR5ZU), a retired technician for the weather services. During many years, his amateur radio activities offered the opportunity to make QSO with the Scattered islands to many of us. Although our exchanges were focused on Tromelin, its “universe” was not confined to this island since it intervened on all the Scattered islands. Witness of the evolution of the working and life conditions, Jacques nicely agreed to talk about his “43 years of islands”.

His  first contact with the Scattered islands was on 1967 when he accomplished a 7 months mission (June 67 to January 68). However, he will put a foot on Tromelin only in March 1971. This two months long mission as a weather observer will be the first of long series since Jacques carried out 23 of them during his career (more than one month) only on Tromelin, which is his preferred one because it is small and that there is not other services.

The work from the weather station…

In this time there, the teams were made up of 4 people, two weather technicians and two assistants. We were like « Robinson Crusoe »! One was affected to the kitchen while the other was working on the generators and took care of the manufacturing of hydrogen for the balloons. Contrary to the slaves who were stuck on the island during 15 years (1761-1776), good meals, a nice atmosphere and a warranty of the return permits us to enjoy the stay, far from the family.

The period post-1980 was the most pleasant according to Jacques. The budget allocated by the MEDETOM made it possible to buy, and to maintain equipment of the weather station. In the major part of the cases, the energy was limited to 10h per day, provided by generators. At one moment, wind mills were installed and ensured the station of Tromelin an energy autonomy. It was a luxury to have electric current available around the clock ! Exploited during about ten years, this technology was not preserved, for lack of qualified maintenance staff.

Without automatic transmission of the data, they were considered initially as an assistance. The observations of 18:00 and midnight UTC were stored in memory and then transmitted in SSB towards the Réunion island  at 3:00 UTC. Transmitter was a 100w Thomson connected to an inverted V dipole, placed not to high to protect it from the cyclones.

Although he never experienced a cyclone during a mission, he intervened very often as a person in charge of maintenance to repair all the equipments. Around 1995, the second wave of automation sounded; the collected datas were transmitted automatically by satellite.

Concerning the throws of balloon, a “radio-wind” was used in the Sixties (403 MHz  transmitter with a barometer. We were following it with a yagi antenna). Then, in the course of time, many techniques appeared. Last was a GPS system coupled to temperature, pressure and moisture  gauges. The throws were suspended after 2010 then transferred to Réunion, Airport of Gillot. 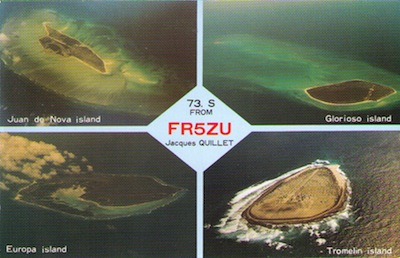 During 43 years, nearly 932,000 contacts were realized. About the half was made from  Tromelin. The other contacts are shared between the other missions: Europa (9), Juan de Nova (8),Glorioso (5).

The station was made up of Swan 350 and monoband  dipoles. Later, a FT DX 500 then a FT850 accompanied by an amplifier took over. The multi-bands vertical antenna Cushcraft R7 replaced the wires.

It was well adapted to this kind of mission with its small size, its low angle of radiation and its capacity to accept the power delivered by the amplifier.

The periods when the electricity was available made it possible to benefit from beautiful openings towards the USA (1h30-5h00TU) although the propagation is excellent all the along the day from this part of the world.

“On November 14th, 1976, I make a contact from Tromelin with a Jordanian station. The QSO is cordial with a good propagation. We talk about our equipment, the weather…then this station tells me that he is the King of Jordan. Surprised (I thought it was a joke), I reply to him that « I am the queen! ».

Once back at home on Réunion island, I found a QSL of JY1 Hussein, King of Jordan. Later, we made others QSO on the other islands and from Reunion. He even invited me to come to meet him in Jordan. I did not go and I regret it; He became a good friend! “

Thanks to Jacques to have shared these memories and to have provided us details and documents. I invite you to visit his two websites http://jacques.quillet.pagesperso-orange.fr/ &   http://www.iles-eparses.fr